It was a privilege to attend the press preview of renowned Mexican-American artist Barbara Carrasco’s jaw-dropping, stunning 43-panel, 80-foot mural “L.A. History: A Mexican Perspective”, which has only been seen in public two times in nearly 40 years, its first time in a museum.

It is most fitting that this article is published on International Women’s Day, as Carrasco is considered to be a “renegade feminist” whose work critiques dominant cultural stereotypes involving socioeconomics, race, gender and sexuality.  Her mural hits all of these marks, while, ulitmately, celebrating the Divine Feminine, as she showcases a massive, powerful indigenous Queen of Los Angeles as the crown jewel of her masterpiece. 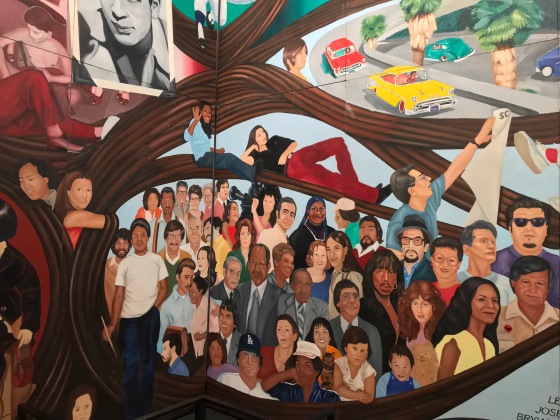 The exhibit gets its title Sin Censura: A Mural Remembers L.A. (Without Censorship) because the mural was censored by the very organization that had commissioned it in 1981.  The former Los Angeles’s Community Redevelopment Agency objected to a number of scenes that either told unsettling stories about the experiences of the city’s people of color, or showcased historical figures they deemed controversial, including Bridget “Biddy” Mason, the last freed slave in Los Angeles.  Mason understood the anti-slavery laws in California, and petitioned for her freedom in court and won, moving on to become one of the city’s wealthiest residents and philanthropists.

Today, Los Angeles is referred to as the headquarters of “The Resistance” to the racist Donald Trump presidency, but in the 1980s, a city agency considered Mason to be a controversial, trouble-maker rather than an inspirational figure, who was one of the forebearers of Resistance in Los Angeles.

A depiction of Biddy Mason, the last freed slave in Los Angeles.

SHE WAS GIVEN AND EXPLANATION.

Carrasco stood her ground and refused to remove the 14 panels. Now, Carrasco, at just 26 years old, was faced with what would become her own historical act of Resistance, with the judge and jury embodied in the Los Angeles’s Community Redevelopment Agency.  Her honorable defiance was met with a harsh sentence: decades in a proverbial prison, a sentence to languish in a dark storage room covered in tarps, never to be seen again.

Today, this towering figure, 20-feet high, with 80-feet of long, cascading hair, casts a shadow of power across the marbled floors of the Natural History Museum in L.A., La Reina de Los Ángeles—The Queen of Los Angeles—has risen, is finally uncensored, and free at last.

Her day has come: Carrasco stands proudly with her masterpiece.

The mural starts off with the beautiful depiction of a Mexican woman, who is based on Barbara’s sister, Frances.  The woman’s hair flows out and touches every aspect of Los Angeles history because, after all, it is from WOMAN that everything flows, everything is born, and everything is held together.  It is especially poignant that a Mexican woman is The Origin, The Indigenous Eve, from which everything emerged in the Americas, in California, in Los Angeles, the ancestral homeland, The Motherland, of indigenous Mexican people.

“This was my chance to show what I wish was in the history books,” says Carrasco.

The “Sin Censura: A Mural Remembers L.A.” exhibition opens to the public March 9 – Aug 19, 2018 at the Natural History Museum in Los Angeles.

*This an excerpt from my upcoming article that will commemorate Women’s History Month by taking a deeper look at the illustrious career and life of this amazing renegade feminist Los Angeles activist and artist.