By Abraham Torres and Cheryl Diaz

Anthony Bourdain normalized the rest of the world to U.S audiences. He sat down in small kitchens, indigenous communities, African villages in the middle of faraway jungles, by fire pits, on wooden planked single-rooms, with a smile, an interest, a conversation.

He walked, slept, rode, flew into our lives, trying to connect our similarities while eating and tasting our uniqueness, our heart-filled dishes of identity that scream individuality, pride and respect.

He was a champion of Mexicans, especially Poblanos from my hometown of Puebla, who he described as the best French chefs in the world.

He really tried to contextualize the universe he was showcasing, a weight wrapped beautifully in street imagery, where traffic lights, roaring engines, and  murmuring crowds that hovered around food stalls thousands of miles away from your living room seemed ethereal, magical, romantic.

Anthony is gone, but his death leaves a great loss for the world. This is not a sanctimonious or overstated claim. No contemporary public figure, TV personality or writer, has Bourdain’s insight and empathy to highlight the perspective of the underdog, the marginalized , the colonized, to bring awareness to restaurant worker’s rights, immigrant rights, and human rights, and then seamlessly weave that with a Jim-Morrison-like cool factor, dry wit and understated intellect, who is able to educate and give historical context to the masses, while taking a shot or drinking a beer and eating street food—all of which brought an alternative ‪awareness and understanding of cultural and political issues to his audience—and that can never be replaced. It is lost with him forever. 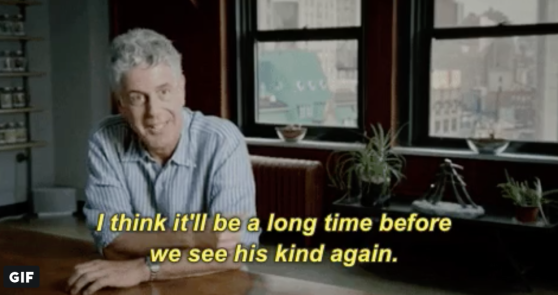 Bourdain’s sentiments on the founder of California cuisine, Jeremiah Tower, who rose to fame as the chef at Chez Panisse in Berkeley, California.

As a writer and artist, I had aspirations to work with him, to educate him about my food and culture, to further expand his universe through my life’s POV—and to answer his burning question about why Mexican-Americans love Morrissey (it’s none of the great, deep philosophical theories that were told to him and have been written about lately, but that’s another article). So the news of his death…well, to put it mildly, sucks.

But, I am grateful I got to share space with him, albeit from audience setting, at least once.

so please let this false sense of security

burn away in the fire of time.

Everyone wanted to be like him, but few have the courage to pay the price for total, raw authenticity. Perhaps that is why so many people say they live vicariously through him, that they want to reincarnate as him. Most people wear a mask, always worrying about what other people will think, spend their days trying to keep up with the Jones’ or the Kardashians, and never follow their hearts or go after their dreams, never truly live from their center. Being a maverick, being authentic, is a lonely space to occupy because, most times, you’re the only real person in a sea of actors who can’t relate to anyone who isn’t another actor “pretending” their way through life.

unless you allow your heart to connect

When Anthony crossed the proverbial velvet rope and was surrounded with people who could help him move past his demons, he continued to hide the last aspect of his psychology that continously dragged him back to dark places. He didn’t allow himself to connect with others, he was the happy clown, who was dying inside. His friends say although he was the most authentic person they’d ever met, he was running from something, hiding from himself, blocking intimate friendships, keeping insanely busy and overachieving so to not address what he called the “dark genie” inside him. So, alas, we see, even the most “authentic” person we know was still wearing a mask.

Maybe the missing link to a balanced life is not simply being authentic, but being able to connect, to open up, share, and directly address your issues with people who’ve been on the same journey.

And, now, he is off to Parts Unknown,

and we will miss him.

He took a walk through this beautiful world, felt the cool rain on his shoulders, and at least, for a moment, Bourdain,lived his dream life, with his dream family, in a dream career, and only he knew how it would end.