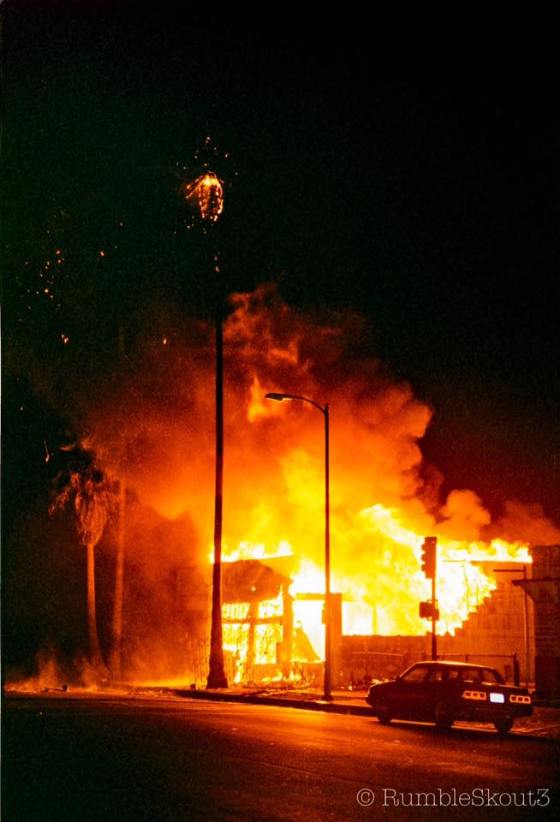 “Paradise Is Burning” shot on the first night of The Los Angeles Uprising in 1992.  Photo by RumbleSkout3 AKA Abraham Torres

It’s time to ease into Monday with some music after an intense weekend remembering The Los Angeles Uprising — the largest civil unrest in American history.

This weekend brought back memories of:

TO LIVE IN DAY IN LA

It’s the City of Angels and constant danger
South Central LA, can’t get no stranger
Full of drama like a soap opera, on the curb
Watching the ghetto bird helicopters, I observe
So many niggas getting three strikes, tossed in jail
I swear the pen the right across from hell, I can’t cry
‘Cause it’s on now, I’m just a nigga on his own now
Living life Thug style, so I can’t smile
Writing to my peoples when they ask for pictures
Thinking Cali just fun and bitches,
Better learn about the dress code, be ‘s and see’s
All them other niggas copycats, these is G’s
I love Cali like I love woman
‘Cause every nigga in LA got a little bit of Thug in him
We might fight with each other, but I promise you this
We’ll burn this bitch down, get us pissed
To live and die in LA
(Let my angel sing)

‘Cause would it be LA without Mexicans?
Black love brown pride and the sets again
Pete Wilson trying to see us all broke, I’m on some bullshit
Out for everything they owe, remember K-DAY
Weekends, Crenshaw, M-L-K

More Rare Photos Of The L.A. Uprising By Abraham Torres Can Be Seen At rumbleskout3.com.

Abraham Torres’ Never Before Seen Photographs Can Also Be Viewed On VICE: “An Unseen Side of the 1992 LA Riots“