Last week my girlfriend and I took a stroll through UCLA’s Westwood Village and went to Gushi, our favorite teriyaki bowl joint.

As we turned the corner, sitting, waiting for his order, was 27-year-old UCLA alum and NBA superstar, Russell Westbrook, of the Oklahoma Thunder.  We ordered and sat down in this small open patio as the sparse crowd around him was trying not to get his attention, and I began texting my girlfriend: That’s Russell Westbrook!!!”

After a few minutes of sharing the space with Russell, two young African-American girls came up to him and excitedly said: We’ve been trying to come up with excuses to say hello, so we finally got the nerve to come over — can we take a picture with you?”  I stood up and said, “The whole restaurant has been trying to come up with an excuse to talk to you. You can hold a basketball camp right here, right now.”  I patted him on the shoulder, and he looked up and smiled.

This was the excuse everyone was waiting for and fans began to line up to snap photos with him.  After the requests ended, he returned to surfing his phone, and his order was called shortly thereafter.  As he left the restaurant, I yelled out to him, “Be cool man!”, and he replied, “You too, man!”, as he crossed the street, slipped away into the night, by himself.

In this tiny part of world, this little teriyaki joint, here we were: a cashier, a few cooks, a spattering of college students, a few professionals, a business owner, a sports mega star, with the occasional homeless man asking for spare change, all doing our thing, all treating each other with respect, all in the same small space, enjoying each other’s company without saying a word after the formalities ended, all in unison, a microcosm of how a larger society should work, a society that vibes with each other, that ebbs and flows with one another, that generates its own positive energy and somehow knows there are bigger issues to be worried about, concerned over, focused on, under a warm summer night sky.  No one was meddling, criticizing each other, calling for separation, asking to respect their space, asking to build a wall, asked to leave, wondering who was breaking the law, who was undocumented, or who they thought was looking to steal or scheme from the system.

Unbeknownst to all of us, we grew the human race that night, if just a little.  We evolved out of primitive scarcity mentality of always being afraid, looking over our shoulders, hoarding our riches, or flashing our wealth, while peeking through a cracked-open tinted black window of a chauffeured Cadillac Escalade.  In this space, we somehow knew everything was all right and left the old trappings at home; those old realities, those old perceived problems that our ancestors have been struggling with since we evolved into our current human form and began nursing our consciousness.

If we are to survive as a species. we need to multiple last week’s experience 7 billion fold.

Humans only evolved in the last second of the last minute on New Years Eve, on a calendar year representing the nearly 14 billion years since the Big Bang to present time.  So the world, the Earth, does not care if we survive or not — we really haven’t been around long enough to matter.  We’ve only scratched the surface of Time.  Our “perceived” significance is but a speck of dust in the annals of the universe.  Time does not care how we spend it.  Only WE will care when it runs out.

If basic survival instincts are important to us, as a collective whole, and making it out alive in the next 1,000 years is something we hold dear, then we better look to the left and to the right, to the other human beings next to us, and realize we are each other’s best bet for survival, for finding a cure, for reaching a balance, for reaching happiness and fulfillment in our lives, for having enough time to fully evolve, for saving Life, for reaching our potential, for making a mark, for the salvation of the most intelligent Life form on planet Earth. 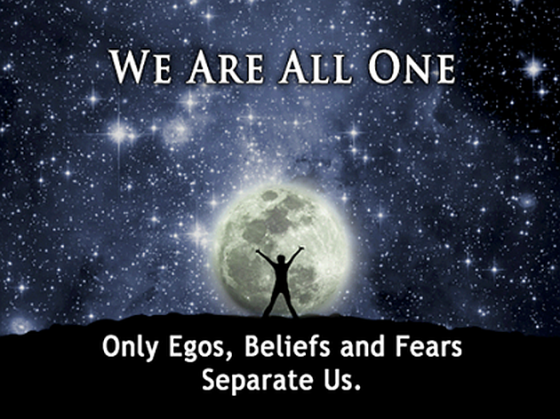